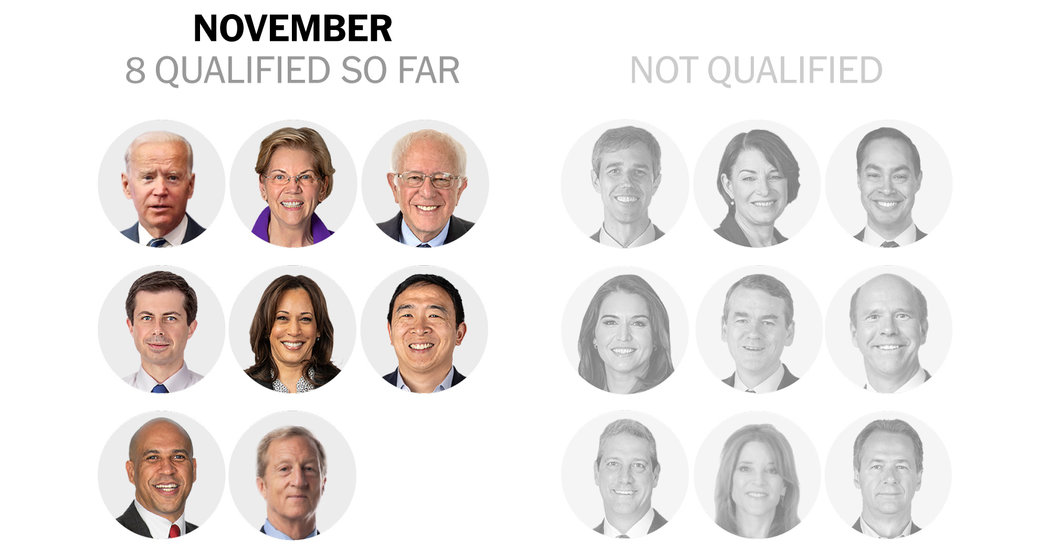 The dynamics of the October Democratic presidential debate suggested the race has been transformed since the summer: Elizabeth Warren was the central figure on stage, drawing the kind of fire a leading candidate usually attracts, such as from rivals Pete Buttigieg and Amy Klobuchar. Joseph R. Biden Jr. played a far more muted role, fading into the background for long stretches of time and drawing little direct criticism.

There are good reasons for Democrats to view Ms. Warren as the most formidable figure in the race right now: She is the lone candidate combining powerful fund-raising numbers with strong organization and polling in the early primary states, and a clear upward trajectory in the national polls. Ms. Warren has gained about 20 points in our polling average since the spring and her rise appears to have accelerated in recent weeks.

But it is too early to discount Mr. Biden as a leading candidate or to assume that his recent political challenges will doom his candidacy. He continues to have a solid advantage with moderate Democrats and African-Americans, and for the first time since July, his position has actually ticked up in our polling average, leaving him two points ahead of Ms. Warren.

Mr. Biden’s most urgent problems are about money and support in the early primary states. He is spending more money than he is taking in and finished the month of September with about $9 million in the bank, well behind Ms. Warren, Mr. Buttigieg and Bernie Sanders, and also trailing Kamala Harris. That could leave his campaign in a significant cash crunch as the race moves into its most expensive stage, when most strong candidates will be increasing their spending on advertising and on mobilizing voters in the early states.

The next few weeks will test whether Ms. Warren can maintain her strength in the race amid intensifying criticism from her fellow Democrats, and whether any of the underdog candidates can take advantage of Mr. Biden’s apparent vulnerability. Mr. Buttigieg and Ms. Klobuchar could pose a significant threat to him in Iowa, as could Cory Booker and Ms. Harris, who are both hoping to use a strong finish there to make inroads with Mr. Biden’s African-American supporters in South Carolina.

Current State of the Race