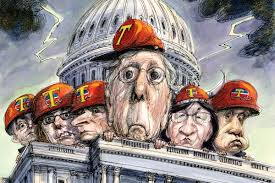 The Senate is currently composed of 53 Republicans, 45 Democrats, and 2 independents, both of whom caucus with the Democrats. The current leaders are Senators Mitch McConnell (R) from Kentucky and Chuck Schumer (D) from New York.

Here is the list of the senators whose seats will be on the ballot in 2020, broken down by party: