Would you be surprised to discover this group has existed for nearly 100 years? Seven things you need to know about Antifa

Online battles between far-right groups and anti-fascists – or “Antifa” – are now regularly spilling out onto the streets of America. But who are Antifa and what do they represent? Anisa Subedar and Mike Wendling went to the West coast of America to find out more. 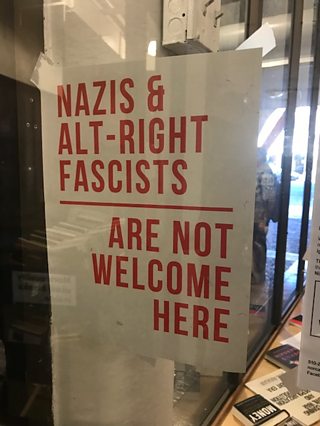 Here are seven facts you need to know to make your own decision if Trump is correct.

1. How long has Antifa been around?

Some Antifa groups date the origins of their movement to fights against European fascists in the 1920s and 1930s. Mark Bray, author of Antifa: The Anti-Fascist Handbook, states the modern American Antifa movement began in the 1980s with a group called Anti-Racist Action. Its members confronted neo-Nazi skinheads at punk gigs in the American Midwest and elsewhere. By the early 2000s, the Antifa movement was mostly dormant – until the rise of Donald Trump and the alt-right.

2. How do you pronounce Antifa?

According to Bray, there are multiple different pronunciations. In the United States, most people say an-tee-fa. In Europe it is sometimes referred to as anti-far, which Bray believes has been influenced by the Italian word antifascismo.

3. What are they opposed to?

Neo-Nazis, Neo-fascism, white supremacists and racism, and these days the movement that encapsulates some of those ideas: the alt-right.

The Antifa groups in Oregon said they come from a variety of political backgrounds, but they were united in their opposition to fascism, and they have an anti-government streak. They said they see creeping authoritarianism in the current American administration that they are looking to build “a movement that really insulates us from the policies of Donald Trump.”

“It’s not just resisting the federal administration, but also resisting moves that can lead to fascism.”

4. Why do they all dress in black?

Like other protest movements dating back to Cold War-era West German anarchists, Antifa supporters will often dress all in black, sometimes covering their faces with masks or helmets so they can’t be identified by opposing groups or the police. It’s an intimidating tactic – known as a “black bloc” – which also allows them to move together as one anonymous group. There are also offshoots – one Antifa group in Oregon said they also have a “snack bloc” of people who provide food and water for their allies during protests.

5. What tactics do they use?

Antifa looks to disrupt alt-right events and far-right speakers. They use a variety of tactics to do this – including shouting and chanting and forming human chains to block off right-wing demonstrators. Some are unapologetic about their online tactics, which include monitoring the far right on social media. They also release personal information about their opponents online, commonly known as “doxing” – they have been responsible for some alt-right supporters being fired from their jobs after identifying them online.

Antifa groups also use more traditional forms of community organizing like rallies and protest marches. The most extreme factions will carry weapons like pepper spray, knives, bricks and chains – and they don’t rule out violence. 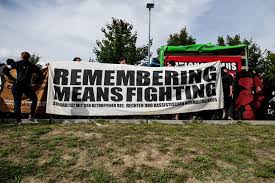 6. How violent are they?

Their willingness to use violence marks out Antifa from many other left-wing activists, although the Antifa members we spoke to said they denounce the use of weapons and violent direct action. They said if violence does occur, it’s as a form of self-defense. They also make historical arguments to justify their position. For instance, they ask, what if opponents of the German Nazi Party had been more forceful in their opposition in the 1930s, could World War II and the Holocaust have been averted?

Antifa has been directly and sometimes physically confronting the far right on the streets and, in some cases, they have been successful in postponing, cutting short or canceling rallies and speeches up and down America. 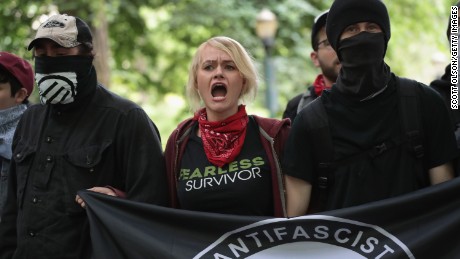 Traditionally direct street action has been a mostly male domain, but significant numbers of women are members of Antifa groups and have been arrested at counter-demonstrations against the alt-right in California and elsewhere. Female members of Antifa groups told us they view the current administration as being anti-women. They point to White House policies on immigration, affordable health care, abortion and voting rights – stating these issues disproportionately affect women and minorities. Sunsara Taylor, from the Antifa group Refuse Fascism, said, “women are motivated to respond to what hits them.”