Lawmakers on both sides of the aisle warned President Donald Trump on Wednesday to avoid plunging the United States into another Iraq-like war in the Middle East, demanding more information about vague warnings that Iran might be planning attacks on U.S. personnel and facilities in the region.

It was reported on Monday that the Trump administration has concocted a plan that involves sending 120,000 troops to the Middle East to counter a potential Iranian attack on American forces. Whatever threat may exist is almost entirely of the president’s own design. Since Trump rebuffed allies, experts and his own administration in removing the United States from the Iran nuclear deal last year, tension between the two nations has escalated steadily. Both have seemed especially jittery in the past few months as the U.S. continues to ramp up sanctions aimed at crippling Iran’s economy.

But it seems like the threat of military aggression from Iran isn’t what the Trump administration wants people to believe. On Tuesday, a British military official told reporters at the Pentagon that there isn’t evidence Iran is any more of a threat that it has been in the past. “We are aware of their presence clearly and we monitor them along with a whole range of others because of the environment we are in,” said Major General Chris Ghika, adding that “there has been no increased threat from Iranian-backed forces in Iraq or Syria.”

According to the New York Times, these early machinations for conflict have largely been set in motion by National Security Adviser John Bolton, a war hawk who supported the invasion of Iraq and unsuccessfully pushed George W. Bush to take action against Iran. The plan to send 120,000 troops was reportedly his idea, as has been the idea that military action against Iran could soon be warranted. The Times notes that, according to intelligence and military officials in both the United States and Europe, “most aggressive moves have originated not in Tehran but in Washington — where Bolton has prodded Trump into backing Iran into a corner.”

One American official said, according to the paper, that the intelligence supporting the idea that Iran is a threat is “small stuff,” and that Bolton wants to goad Iran into taking action against American forces, thus, in his mind, justifying a military response. Vali Nasr, the dean of the Johns Hopkins School of Advanced International Studies, told the Times the current tension with Iran is “a crisis that has entirely been manufactured by the Trump administration.” 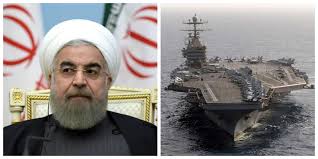 Trump’s narcissistic mental disorder allows him to really not care what anyone has to say. He wants the war and that is all that matters.