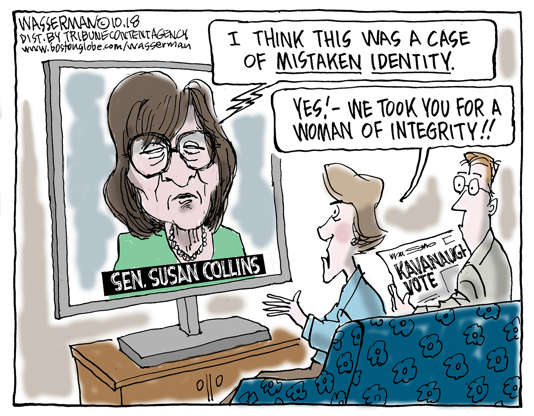 In Lincoln, Nebraska a white man mows an SS symbol on his front lawn … across from a black man’s home.  The police were called, but the Lincoln police told the one man his neighbor could mow nazi symbols, keep his Confederate flag in the window, and place proud symbols of the Republican party on his property.

Odd in light of Texas? Perhaps not!

Do Republicans know NO shame? A yard sign showing an elephant with its trunk up a girl’s skirt was confiscated by police.

A woman in Central Texas placed a political sign she painted (from a political cartoon published in the Washington Post) was forced to either have the sign REMOVED by POLICE or be ARRESTED!!! (I am not reporting her name because she has already received too many threats  for her safety.)

The  woman’s sign features the GOP elephant logo with its trunk up the dress of a female figure, with the word “Help,” next to the phrase “Your vote matters.” Behind it in her yard were campaign signs for Democratic candidates.

Sid Miller’s (Republican) campaign spokesman, Todd Smith, said he believed the girl on the sign was meant to be Kavanaugh’s daughter. Many of Miller’s supporters sent him a photo of the sign after it had circulated on social media, Smith told the publication.

“It was vulgar and disgusting and had no place in someone’s yard,” Smith told the Dallas News. “The Democrats are so distraught that a conservative might take a seat on the Supreme Court.”

He wasn’t told to stop posting on Facebook, but the woman is forced to take down her sign.